Naoshima Onna (Women’s) Bunraku is a unique all-women troupe of puppeteers from Naoshima, one of the many Japanese islands, that dates back to the Edo period. They observe, strictly, the Ningyo Joruri tradition of 3 puppeteers, a shamisen player and a joruri chanter but with an all-female troupe performing both male and female roles. They used to perform on a boat or at the seashore, when no performance venue existed then. 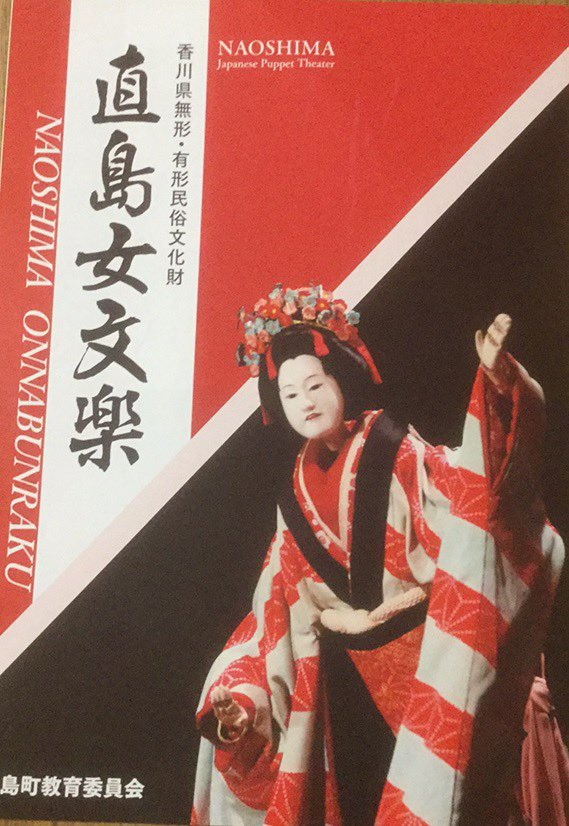 It is said that if one ever goes to Naoshima, the island of Nao, Naoshima Onna Bunraku is a must see. Naoshima, known to be a place for traditional performing arts since the olden days, has been home to Naoshima Onna Bunraku, one of its inherited traditions, for 71 years.[2] The troupe is housed at  Kagawa Prefecture, Kagawa-gun, Naoshima-cho 871.

Considered to be the only one-of-its-kind in Japan, Kagawa Prefecture recognized this elegant Naoshima Bunraku art form that exemplifies pride in Naoshima culture and the accomplishments of these women by designating the troupe as both the Prefecture’s Tangible Folk Cultural Property (県指定有形民俗文化財) in 1962 (Showa 37)[3] and the Prefecture’s Intangible Folk Cultural Property (県指定無形民俗文化財) in 1984 (Showa 59)[4]. Naoshima Onna Bunraku has contributed immensely to the continuity of the Bunraku puppet tradition, which is traditionally a man’s world.

In September 1962 (Showa Year 37), the accomplishments of these women was recognized as a Tangible Folk Cultural Property by the Kagawa Prefectural Government.

The Birth of Naoshima Bunraku

During the Edo Period, Naoshima was a feudal territory of the Tokugawa Shogunate. From the middle of the Edo period until the middle of the Meiji period, stages were built in the island and Kabuki and Ningyo Joruri puppetry performances and other forms of theatre were performed and flourished.

In those days, Awaji puppet theatre (Bunraku) troupes would also sometimes come to Naoshima to perform, thus the people of the island have instantly developed a keen interest in Kabuki and Joruri puppet manipulation. Four families of Kake, Nakaya, Kittaidon, Gizaemon, who had puppets in their possession founded schools and became the iemoto (the head of the school) to further deepen the growing interest in Bunraku. However, a tragic incident in 1873 (Meiji Year 6) caused Bunraku to be discontinued throughout a span of three historical periods of Meiji, Taisho until Showa.

A group of five people — Takada Kichidayu, Nakane Seigo, Shimotsu Wakadayu, Yamana Gizaemon, and Inui Shigezaemon — embarked on a trip to Awa to purchase deko puppet heads. However, on their way back, they encountered a storm off the coast of Shodoshima that wrecked their ship, which unfortunately killed two of their companions — Takada and Yamana.  This was said to be the cause of why the popularity of Bunraku in Naoshima waned.

Shortly after the end of WWII, when the men were busy rebuilding the country, there was a longing for the revival of entertainment, thus an all women theatre troupe was organized to perform Bunraku. Using old puppets — one was an antique small puppet owned by Shimotsu Morio, Aoki Tsuta’s younger brother, who was a doctor by profession in nearby Takamatsu and another puppet from Shimotsu Seizaemon — that survived the war and were found in the island, the women began their puppet theater training in 1948 (Showa Year 23). These women — Aoki Tsuta, Shimotsu Katsuno, Miyake Suma, Murao Kuma — who were already fond of deko puppets since their childhood years and who had not forgotten about it, became central to the re-emergence of bunraku. This gave birth to “Naoshima Onna Bunraku”.

In 1949 (Showa Year 24), they had their debut performance on Respect for the Elderly Day, that pays tribute to the senior citizens of Naoshima, as recommended and supported by the town’s volunteer organizers.

In November 1953 (Showa Year 28), they performed the piece Awa no Naruto at Takamatsu for the Kagawa Prefecture’s Intangible Cultural Property recognition ceremonies.

In September 1962 (Showa Year 37), the accomplishments of these women was recognized as a Tangible Folk Cultural Property by the Kagawa Prefectural Government.

In August 1984 (Showa Year 59), the women’s troupe was recognized as an Intangible Folk Cultural Property by the Kagawa Prefectural Government. In 2012, at the time of my research, Narita Kazue was the zacho, the troupe leader, of the 10-member troupe. Before Narita Zacho, Sumida Michiko was the zacho of a 13-member troupe. At present, Konishi Shimako is the zacho that leads a 14-member troupe.

Within the town of Naoshima, they perform for kindergarten, elementary, junior high school students, visitors to the town and in response to special requests for performances. They also perform during annual events such as the arts festival (芸能大会), respect for the elderly day etc. More recently, they have been performing for the Setouchi Triennale or the Setouchi International Art Festival.

Outside of Naoshima, they have gained popularity in performing for arts festivals, in response to special requests for performances and to cheer-up old people at nursing homes.

They have introduced this outstanding art form to local governing bodies, as well as in places outside of the prefecture and have received noteworthy praise reaching as far as the USA. This has become a source of pride for Naoshima Onna Bunraku troupe but also for Naoshima-cho; and needless to say, has also brought delight to Kagawa Prefecture, and to a greater degree, Japan.

In February 2013, upon the invitation of the Embassy of Japan in the Philippines and the University of the Philippines Center for International Studies, this unique all women puppet troupe had their maiden overseas performance in the Philippines to celebrate the 40th Year of ASEAN-Japan Friendship and Cooperation. On February 11, 2013, the performance entitled Naoshima Onna Bunraku was held at the Maestranza Park in Intramuros, Manila, where the all women troupe performed Dango Uri and Keisei Awa No Naruto. This was followed by a joint performance of Ebisu Mai by Naoshima Onna Bunraku with the UPCIS Bunraku Ensemble, symbolic of the intercultural collaboration and cooperation between Japan and the Philippines. The second performance on February 12 was held at the Tanghalang Huseng Batute, CCP with the all women troupe performing Keisei Awa No Naruto and Dango Uri.

After the rehearsal at the backstage of the Welfare Center (福祉センター), 2012 Members of the Naoshima Onna Bunraku with their Filipino audience at the steps near the lobby of Tanghalang Aurelio Tolentino, Cultural Center of the Philippines,  2013 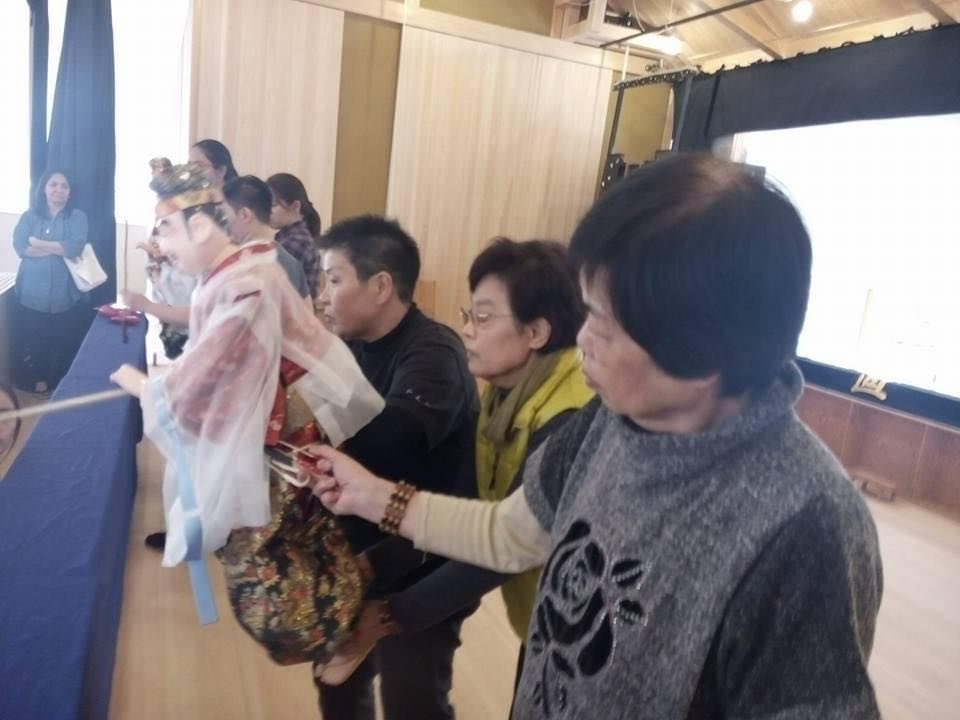 [1] Dr. Umali is grateful to Naoshima Onna Bunraku, the Horiuchi family, my host family in Naoshima, and the people of Naoshima for welcoming me, a Japan Foundation Japanese Studies Fellow, in their island for they allowed me to conduct my research on the Naoshima Onna Bunraku and acceded to my request for mentoring of Filipinos in the art of Bunraku in Naoshima in 2012. Since then I have visited the island at least once every two years bringing with me members of the UPCIS Bunraku Ensemble to be mentored by the women puppeteers. I am also grateful to Darwin Desoacido and Laureen Therese Lioanag, both mentees of Naoshima Onna Bunraku being members of the UPCIS Bunraku Ensemble. for their assistance in preparing this.

Video caption: Maetani Akiko (head puppeteer) of the Naoshima Onna Bunraku Performs Ebisu Mai in a Re-staging of their Traditional Performance on a Boat, August 2010, Naoshima Shore. The boat was created by the 88 year old Tsuda Takeshi, the only living traditional Japanese boat (和船) maker in Japan at the time of research in 2012.